● The sub-base should be level and free from dirt , rubble and anything else on its surface .

● Installation conditions have to be natural environment .

● The material must be at the ambient temperature (below 30℃) before installation .

● A metal pole with handles for controlled rolling.

● Mini Tractor, use of heavy machines is not recommended. If there is no alternative, turning on the shock pad must be minimal as this can cause damage. or human installation is proposed, since the shock pad is light in weight.

● The rolls will be labelled on one side only. Mark the side is to be unrolled and lay the rolls on the pitch with reference to the field drawing .

● The first roll has to be unrolled along one side of the pitch in line (suggest to set a straight line along one side to keep the first roll in line.). If not in one line, please gentlely adjust from one direction only. Allowing at least 20cm over at each end of the roll. And keep it in position with press from the top.

● Unroll the second roll adjacent to the first. The roll should be unrolled quickly in a line and repositioned either when rolling or afterwards. Please avoid pulling the pad and reposition must be in the way of parallel moving in one direction. Usually two persons adjust the pad to avoid damaging or rucking the shock pad . 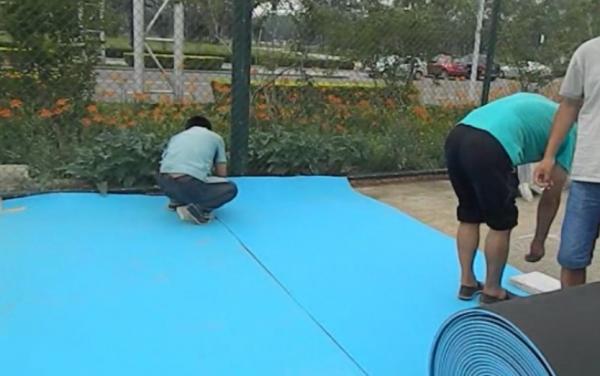 ● Leaving NO gap between each roll and make them close to each other tightly ( No pulling, but parallel moving in one direction ) . After reposition, please press the pad with the weight from the top for easy handling in the following steps.

● Continue to unroll the rolls of shock pad adjacent to each other with the labelled side of the roll as guidance as to which way to start. Make sure each roll to be in a line. Check and slightly reposition the gaps between each roll along the first roll in order, still have to be in one direction parallelly, and avoid pulling to two directions. After reposition, please press the pad with the weight from the top to avoid move due to uncertain factors. 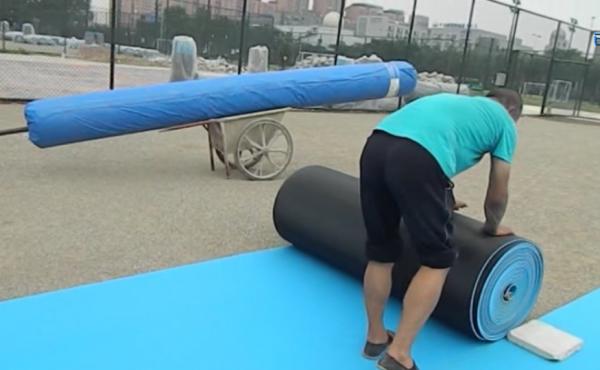 ● Join the shock pad with cooling tape, water proof tape or normal tape according to the pitch environment.

● After First 6 rolls unrolled and joined, unroll two rolls of grass carpet. Pad and grass to be unrolled alternately. Then, unroll and join every 3 rolls of shock pad, and unroll 1 roll of grass in order. (Remark: If you prefer to cover the ground with the pad first, it is suggested to glue the pad to the ground in the way from dot to dot or of cross line to fix the pad before grass unrolled.)

● Neatly cut the shock pad over from each end after completing installation of grass carpet. Glue the shock pad ends to the ground from dot to dot ( no need to glue the full edges ) .

● Any damage of the shock pad can be repaired by cutting it neatly and replacing with the spare material and tape.

● Because the shock pad material is very light, temperature difference during the day can cause vapour on the ground which is supposed to make the shock pad bulge and thus the surface may look not flat. This is normal (Not expansion or shrinking of the material), and this will not happen again after the grass and infills are covered on it.

With the rise of the artificial turf industry, Changzhou Taihui Sports Material Co.,Ltd founded in Changzhou City Wujin hi-tech development zone, is a high-tech enterprises dedicated to R&D and manufacture of Eco-friendly infill granule and shock pad. In the purpose of “Creating happy sports”, relying on the Sichuan University and Changzhou university town, persistent in the development of innovative material, good relations of cooperation between schools and enterprises has been established.

We always adhere to the belief that the product quality is the best solution. Now, more than ever, we insist on innovation to provide customers with the best site performance, most secure site effects, and the most comfortable sports feeling.

TAIHUI Policy: Innovation is the norm, quality is our life; Be pragmatic is the purpose, and the efficiency is our goal.

TAIHUI forge ahead in a pioneering and innovative manner

Business process is a string of precious historical footprint.

Looking back, we proceeded with passion and looking forward to the future, we will forward courageously.

We accept the challenge and take advantage of the time.

Grow in the self-cultivation, getting mature in the service, and succeed in the sentiment.

TAIHUI is struggling to move forward and has opened a section of the ever-fading trend of the glorious journey!

Send your message to this supplier
You May Like
Find Similar Products By Category:
Artificial Grass & Sports Flooring
Hot Searches:
Inquiry Cart 0
Contact Us
Inquiry Cart
Back To Top

Thank you! Your message has been sent to the following suppliers.